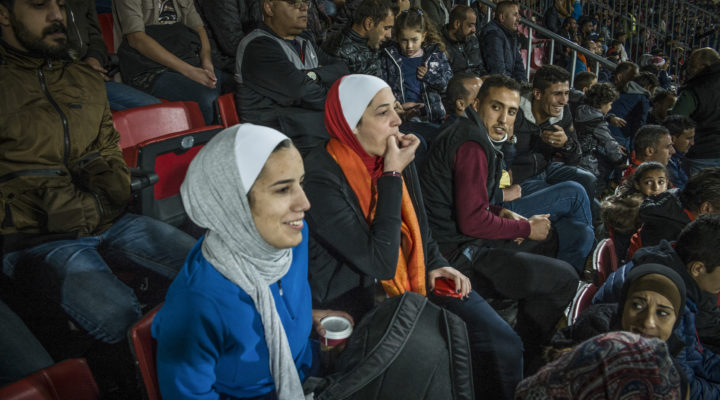 Only a few decades ago, a women´s football competition broadcast on the national TV was something unheard of. Football fields, stadiums, and clubs, were places exclusively for men, so was assumed. After all, who would watch a match between women, not half as exiting as a match between professional male counterparts that have been training all their lives to score and defend; know how to mobilise and entertain large audiences; and, above all, have good knowledge of the game?

Over the past years, this image has changed. Football is no longer perceived as a sport only for men. Football has become increasingly popular among women, new female clubs have been founded, and women’s football has become more valued by both male and female supporters and the media.

In the context of the exhibition, WHAT THE FOOT?! organised by the HUMA collective, Géopolis invites Johanna de Tessières (photographer), and Ramzi Bouhlel (founder RWDM Girls) for discussion about the position of women in football, and the relationship between football, personal development and empowerment. Can football be a tool for personal development? How can media attention help to change the existing image of female football players? And which measures can be taken to tackle inequality on the field?

Johanna de Tessières is a photojournalist based in Brussels, member of the collective HUMA and winner of the Montaigne Trophy. For the project ‘WHAT THE FOOT?!’ she photographed female football players in Belgium, France, Jordan and Palestine.

Ramzi Bouhlel is the founder of RWDM Girls a new football club for girls from Molenbeek and surroundings that aims to give girls and young women the opportunity to play football develop themselves, and surpass stereotypes.